You can find on this page the Brooklyn bike map to print and to download in PDF. The Brooklyn bicycle map presents the bike routes and lanes of Brooklyn in New York - USA.
Brooklyn Bike Paths, Bike Lanes & Greenways cover more than 300 miles (more than any other NYC borough) and include Ocean Parkway, America first bike path, which opened in 1894 as its shown in Brooklyn bike map. Prospect Park and the still being developed Brooklyn Waterfront Greenway are among the most popular cycling destinations. 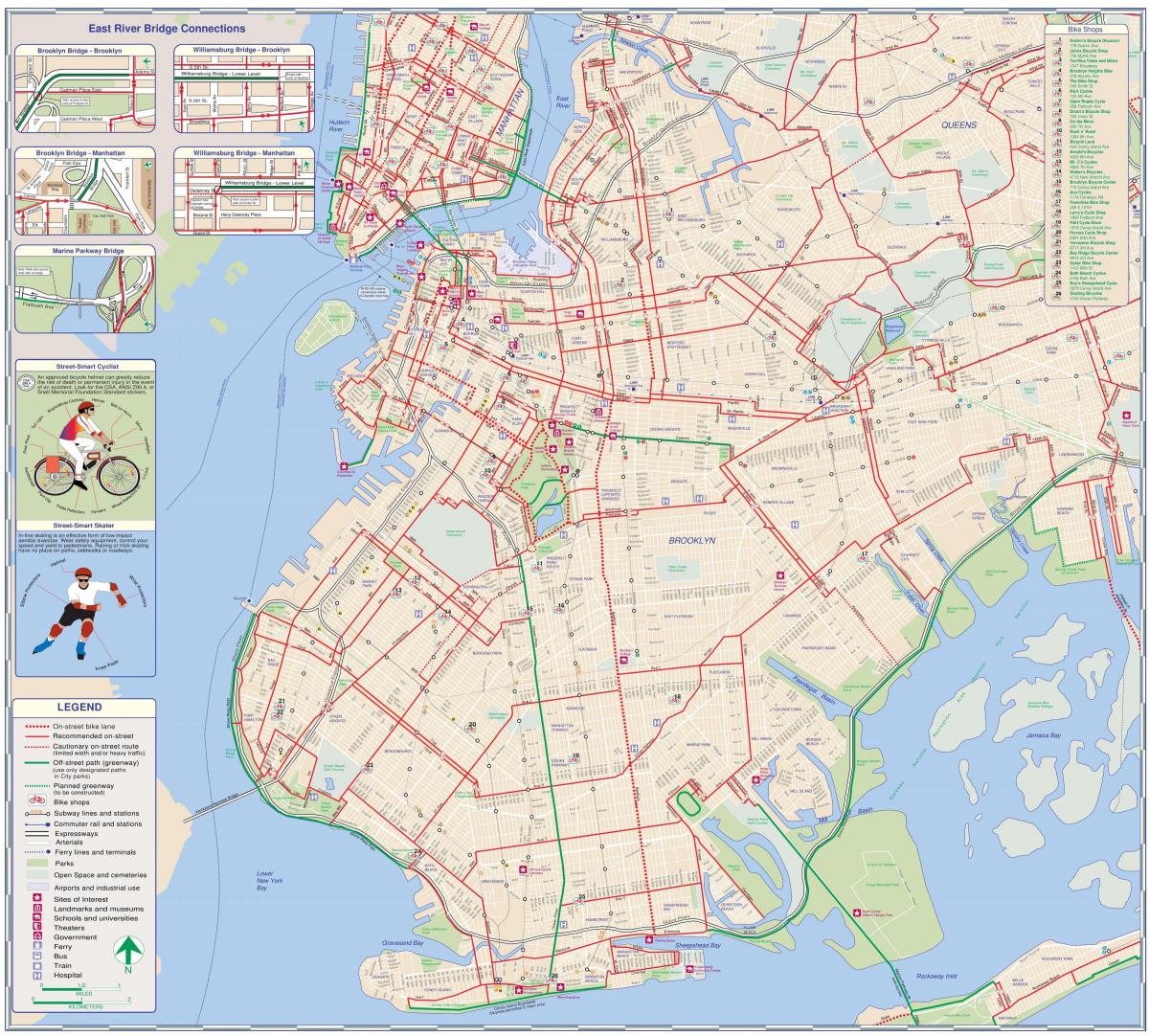 There is no better place to begin biking in Brooklyn than in its biggest park. Start by entering at spectacular Grand Army Plaza as you can see in Brooklyn bike lane map, then take it slow in the huge bike lane or join the spandex-clad mass of men whipping around the park in circles like they are competing in the Tour de France. There are a few paths that will take you into the park, including two that cut right through the middle in case you want to explore, gaze at the lake, plop down for a picnic or just drink some water under the shade of a tree. If you want to see some stunning waterfront views, head down (or up!) the Kent Avenue bike path, which begins in South Williamsburg and goes all the way up through Greenpoint.

Coney Island is easily accessible by bike as well as its mentioned in Brooklyn bike lane map. Make your way from your starting point to Ocean Parkway, where you can cruise down the separate bike lane through peaceful neighborhoods, taking the opportunity to relax before you join the lively chaos of the always crowded boardwalk. There is nothing quite like biking over the water from Brooklyn to Manhattan (or vice versa), and my favorite bridge to cross by far is the Williamsburg. The bike lane on the Brooklyn Bridge is always flooded with pedestrians, and while the ride over the Manhattan Bridge is lovely, it is not quite as spectacular as crossing the Williamsburg.

Duclie Canton, a Bedford-Stuyvesant-based safe streets advocate with Transportation Alternatives, likes biking from her home to the Williamsburg waterfront at Domino Park as its shown in Brooklyn bike lane map. Canton starts the route on Throop Avenue before heading north into Williamsburg, and then hanging a left, where the route takes you all the way to Domino Park on Kent Ave. The 8-mile Stuyvesant Heights route starts off heading around Nostrand and Greene avenues, before making a series of turns along the gorgeous residential blocks, where pedal pushers can see the architecture of the neighborhood, before ending up one block from the starting point, at Bedford and Greene avenues.